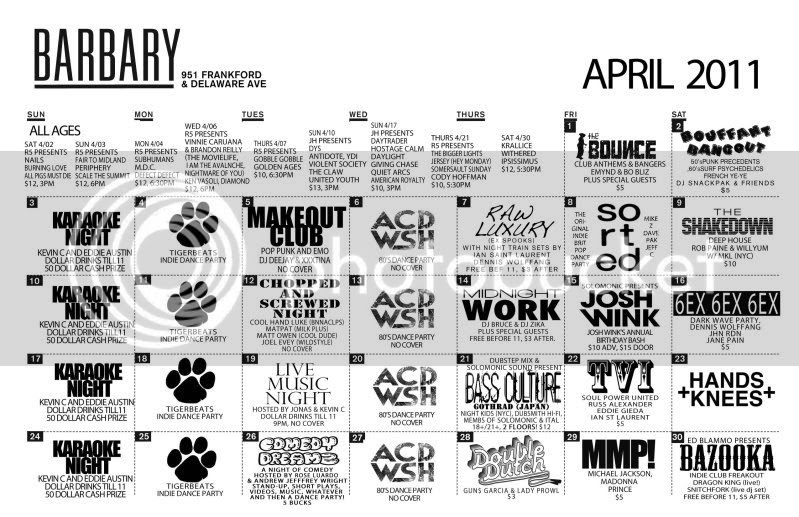 Ah, so the Surkin show on Thursday isn't an all-ages? Damn, there is no love in the world for 18 y/o's.

The myspace page and the blog have the Micheal Madonna Prince night on different Fridays .I just wanted to know which one is right .

Is the teenage bottlerocket show in october gonna be all ages?

the hood internet? the 19th?

Can you buy tickets in advance for Aeroplane this Saturday? If so, where?

Hey,
I'm feeling the club, great vibe.
We're based in Brooklyn, just dropped our debut album and
looking to bring music to Philly.
I'd like to talk to y'all about putting something together.
I pasted the one sheet below. Check out some music when you get
a minute and hit me back.
Much thanks,

There is a storm gathering momentum somewhere in South Brooklyn, and his name is Paul Josephs. Inspired by the deepening challenges of our times, he and his band MetroSonics are poised on the edge of this historical precipice, preparing to unleash a searing lyrical and musical firestorm, aimed squarely at the System that got us into this mess. That's Focused Fire, the name of his imminent debut album, and a call to arms of unprecedented musical breadth and lyrical consciousness.
Bridging the divide between hip-hop and the jam band scene, MetroSonics is a powerhouse live band churning out vicious grooves, and featuring front man Josephs rhyming, singing, and wailing on guitar. On Focused Fire, Josephs, a freestyle fanatic, student of West African drums, Jazz, Blues, and Classical guitar, accomplished martial arts practitioner, and teacher, applies his unique arsenal of influences and creativity to the building blocks of hip-hop. His lyrical flights, which reveal a fierce political and environmental awareness, wisecracking wit, and penchant for wordplay, incisive guitar playing, and distinctive synthesis of a broad spectrum of traditions come together to produce an unparalleled musical experience.
Josephs, who produced and composed Focused Fire, recruited an airtight ensemble of outstanding musicians and a top-notch post-production team to realize his vision. The team behind Focused Fire have worked with the likes of Outkast, Santana, Notorious B.I.G., Stevie Wonder, Alicia Keys, The Roots, Erykah Badu, Santogold, Aretha Franklin, Pete Rock, Al Green, Beyonce, Jay-Z, and more.
A veteran performer, touring and building on a growing fan base is Josephs’ primary focus. He plays regularly in NYC, and the surrounding areas, at such venues as Joe’s Pub, The Blue Note, NUBLU, Rockwood Music Hall, and many others. The group is planning a northeast tour for early 2010, bringing their fire to college campuses and the major cities in the region; NYC, Boston, Philly, D.C., Burlington, and New Haven. Then, beyond. There is too much at stake. Paul Josephs is a man on a mission, and he's taking it to the stage, leaving a trail of scorched ears in his wake.

who does the booking?

Hey can you please telll me how much this show will be? Id like to drive up for it! Thanks

Hello, I came on Friday night (had a really great time) but I lost my keys ! (it is a big set of keys with a blue ribbon) Can you please tell me if you found anything ???
I can't reach you by phone...

Thanks a lot.
Cecile.
ceessou@yahoo.fr

Hey guys, My name is Maurice (aka The Mighty Mojo). I'm a DJ currently based in Liverpool, England but with slots all over the country.
I'll be spending Thanksgiving in Philly this year visiting my Mum, and was looking to spend a little time showing you guys how we party over here.
I've heard good things about your bar and was wondering if talk to whoever does your booking. My email is platformradio@googlemail.com and i have a page on facebook about one of my weekly shows, Bear Necessities

hi are there any tickets at the door for the grey area show on the 19th?
I'm planning to fly over from the netherlands
thanks

Chicago’s most exciting rock group, Verona Red, will be touring through Philadelphia on Thursday, March 3, and we’d love to book a show at The Barbary.

We’ll be hitting 15 cities in support of our new 6-song EP, Pound, which will be released February 25, and Philadelphia is one of them. We’re working with Groundwork Marketing to do national and regional promotions to support the album, and to promote each show on our tour. We expect positive reviews and lots of exposure, and we’d love to list The Barbary as our stop in Philadelphia!

Is Thursday, March 3, available for us?

Hey, looking for info about booking a night at the Barbary. Where should I contact?

you were closed on christmas. you suck and owe me $14 for the cab ride there and back. thanks for nothing santa

someone stole a blue hand crocheted scarf that meant the world to me in at Barbary in Fishtown/East Liberties Philadelphia. It was a gift and I will be willing to pay $100 for the return of the scarf or any information that will directly lead me to who took it.
It had no tag was hand made by someone dear to me
It only worth approximately $5 in yarn and 4 hours worth of work.
This was custom and has signs to tell me if this was the one I owned.
I do not wish to cause problems but like i said i will gladly pay up to $100 (as this is all the money i can spare) for the return of this scarf.
Even if you or your friend stole it please return it i will gladly pay you the money
If you did not steal the scarf if you could lead me to the person who did or return it i would greatly appreciate it.
so if one of your friends suddenly acquired a blue scarf with no tag on it and it has thick yard and very heavy and you would like to make $100 take the scarf give it back and then split it with them.
no scarf like that would be close to that much money.
Thank you so much for your time and consideration.
It is approximately 2foot by 6foot.

Tourfilter's saying Bright Eyes at the Barbary April 30? What?

Hi, we are a swedish pop noir act called LOWE signed to the WTII label i US: We are playing at the CMJ Marathon and will to a US tour around those dates. How to get in touch with the bookers at the Barbary?

You know it's August, right? Wanna come but need calendar.